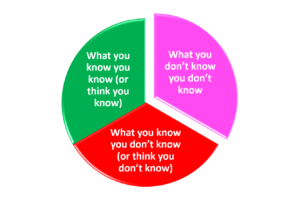 The origins of this thought process is credited to former Secretary of Defense Donald Rumsfeld who, in a speech to NATO in 2002, stated:

The goals for this post are to have threads that provide good examples of how to shrink the Pink Slice in Emergency Management situations (it doesnt have to just be Response – could be any phase of the Disaster Cycle). We may start a new thread, add to existing ones ourselves, etc. Better knowledge and understanding – and the chance to shrink the Pink Slice a little more each time, is what we hope to achieve.